I didn't play World of Warcraft until I met my man and he taught me how to play. In fact, one of the reasons I fell in love with my man as he was a great Starcraft player, which I never had much time to play in my life but I always enjoyed watching the game if I could. As a Sociology / Political Science graduate, I've been always a nerd, but definitely Starcraft was a bridge between my man and I to find the first common ground. We appreciate Blizzard for that and the passionate developers behind the scenes. However, all the good things stop there.

As I said in the beginning, I'm not really a gaming person, and I started playing World of Warcraft in 2011 to understand my man better and share one of his hobbies. Even now, I just log onto my character and do a few daily quests (mainly pet battles) to get some achievements slowly without being pressured or stressed. That's mainly because the contents in WoW has become a bit boring and repetitive over the past few years. Anyways, since the start, I've always been more of a pet battler and collector, rather than hardcore PvP or PvE player.

I also never caused any trouble, so I only have a small number of customer support tickets. 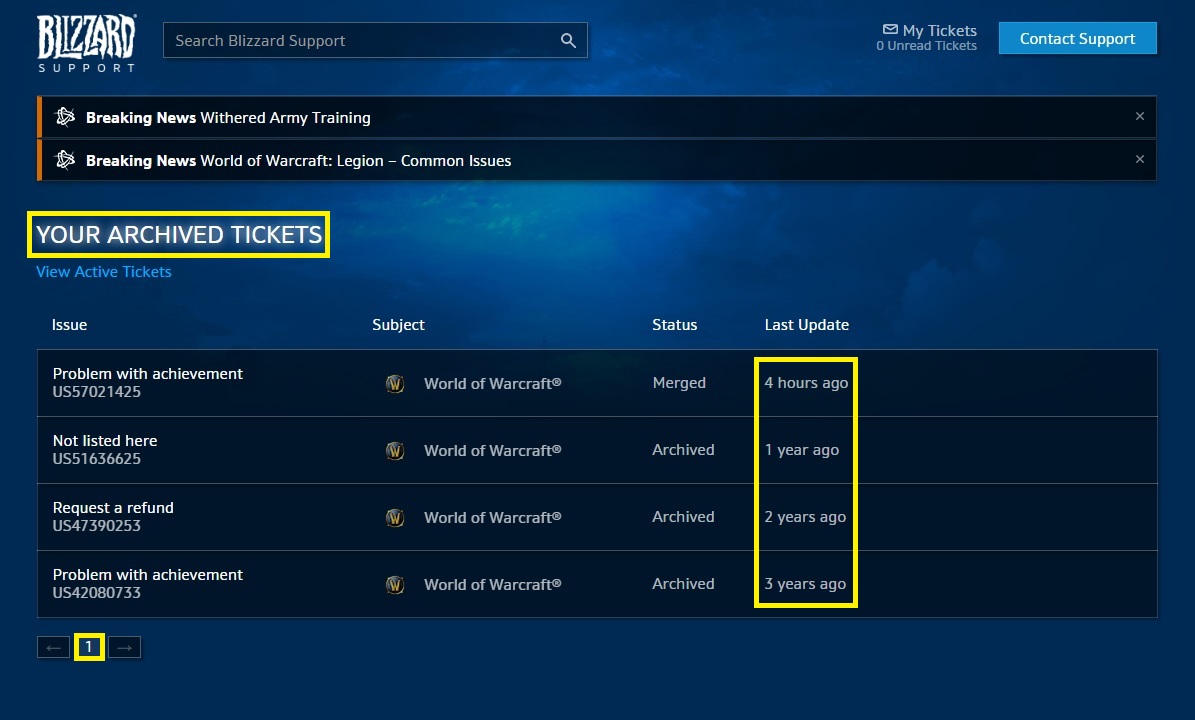 Amongst all these tickets, there has been only one ticket that was about the pet battle bug that occurred 3 years ago, which was minor and I didn't mind doing it again as it didn't take much time for me to defeat.

However, things have gotten worse since the new Legion launch this month. Of course, my man and I leveled up our main characters again, then we got bored of the repetition of the similar concept from the Draenor, so we've been on and off from WoW. I've been trying to do some daily pet battles at least as I don't want to waste money for the month and the cost of the expansion. And occasionally my man joins and does some quests together.

And there, my man and I found that the Wildlife Conservationist quest was broken as we were in the same party doing the same quest. My man got credit for the achievement and the 12 pet charms it awarded, but I didn't. It was very upsetting, because it took me at least 30 min to complete the quest, travelling all over Val'sharah. So I sent the bug report and also created a ticket under the right section to get customer support like how Blizzard named it. 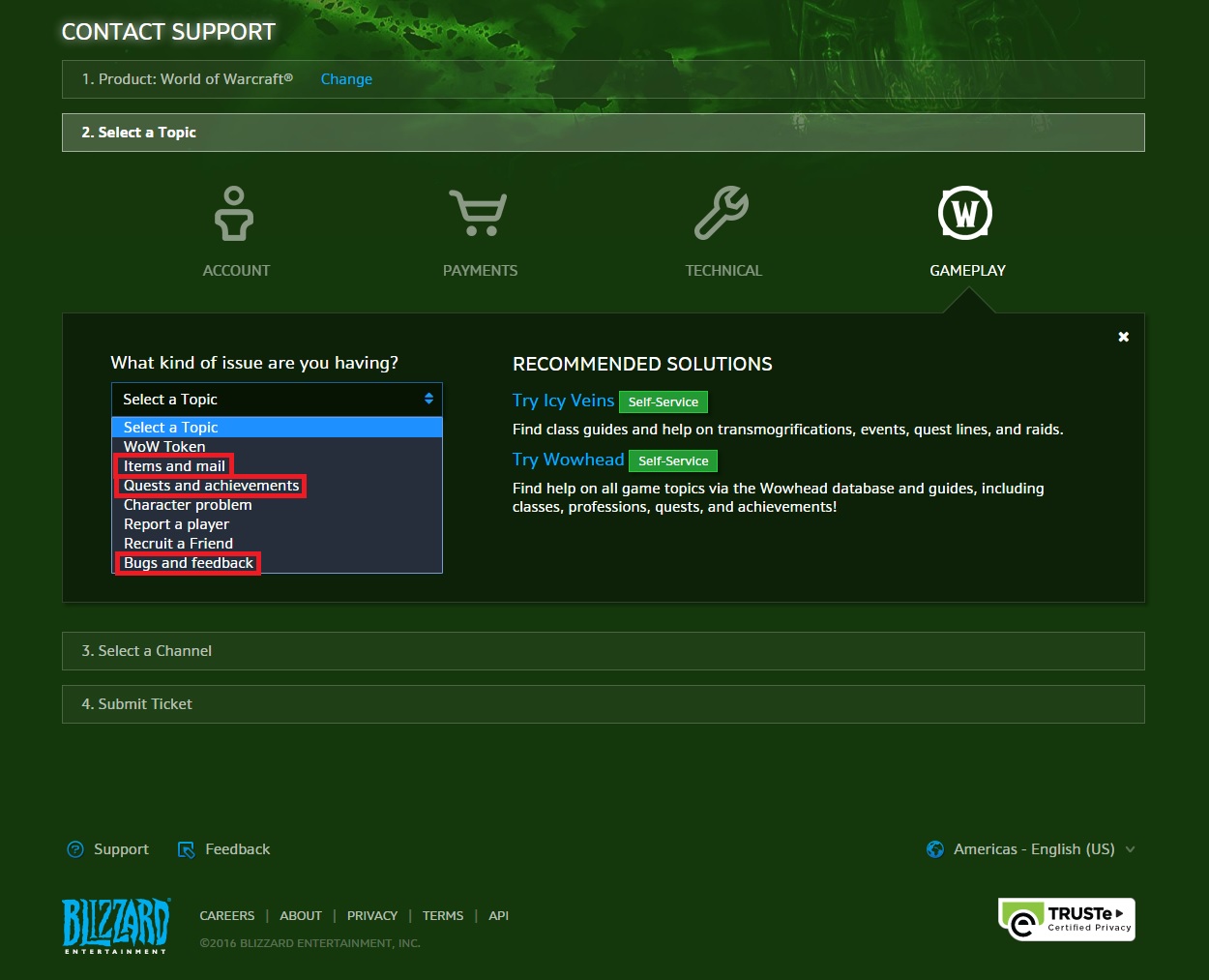 My man told me that Blizzard Customer Support doesn't support customers, and not to waste time on them. Apparently they've been like that for quite long time. It was a bit funny to hear that kind of negative feedback from my man as he's normally a very positive person. Well, I never really had much experience with these kind of issues, so I naively trusted their misleading Customer Support section and selected the right topic.

And here's my first conversation with Game Master on Wildlife Conservationist. 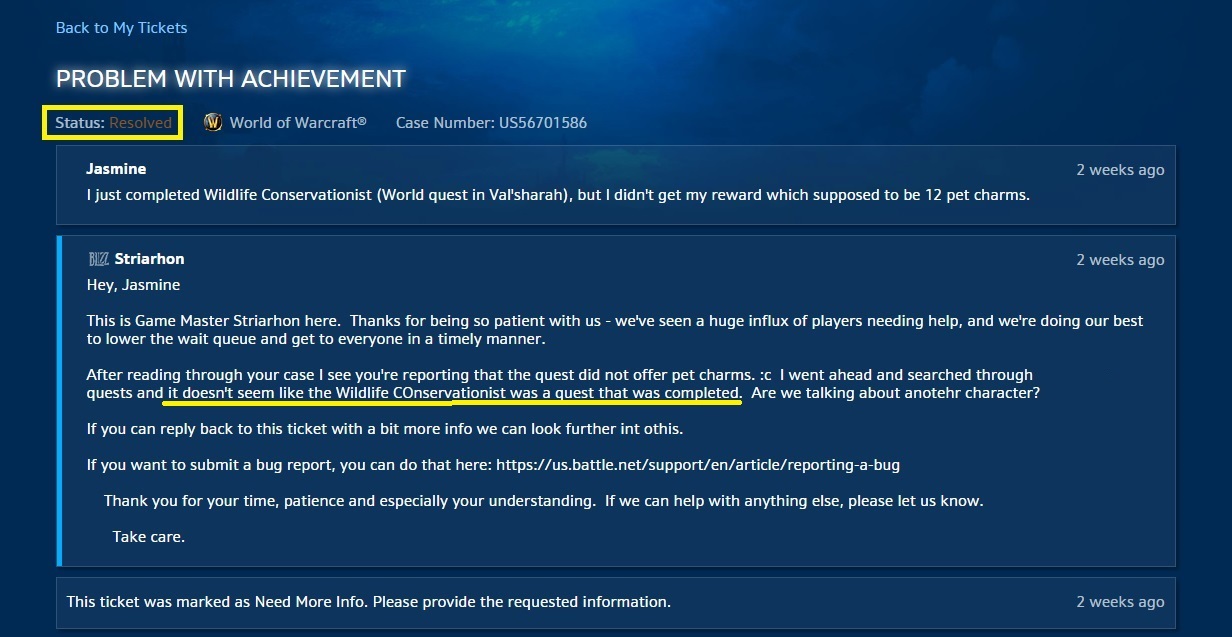 His answer was that it didn't seem that I've completed the quest. In fact, that was why I contacted them from the first place, so I replied to him and told him again what happened as I thought that he wasn't getting what I was saying.

And Another Game Master appears and told me that I've NEVER had or completed the quest. Wow, do you see the transition, there? I couldn't still understand what they were trying, so I gave them another chance as they were clearly looking at their bugged system that failed to record.

In the meantime, while on another pet battle-related quest called Flummoxed in Suramar, I encountered another bug. Although I defeated him with 3 magic pets, I got credit for only Pet Battle in Broken Isles, not for the achievement I was shooting for Master of Magic. This was indeed very frustrating, because I already had another ticket open for a very similar problem. And clearly I didn't pay so much money for a Beta game that was full of bugs. So I took the same procedure: reporting the bug and created a ticket, this time under the Achievement section. 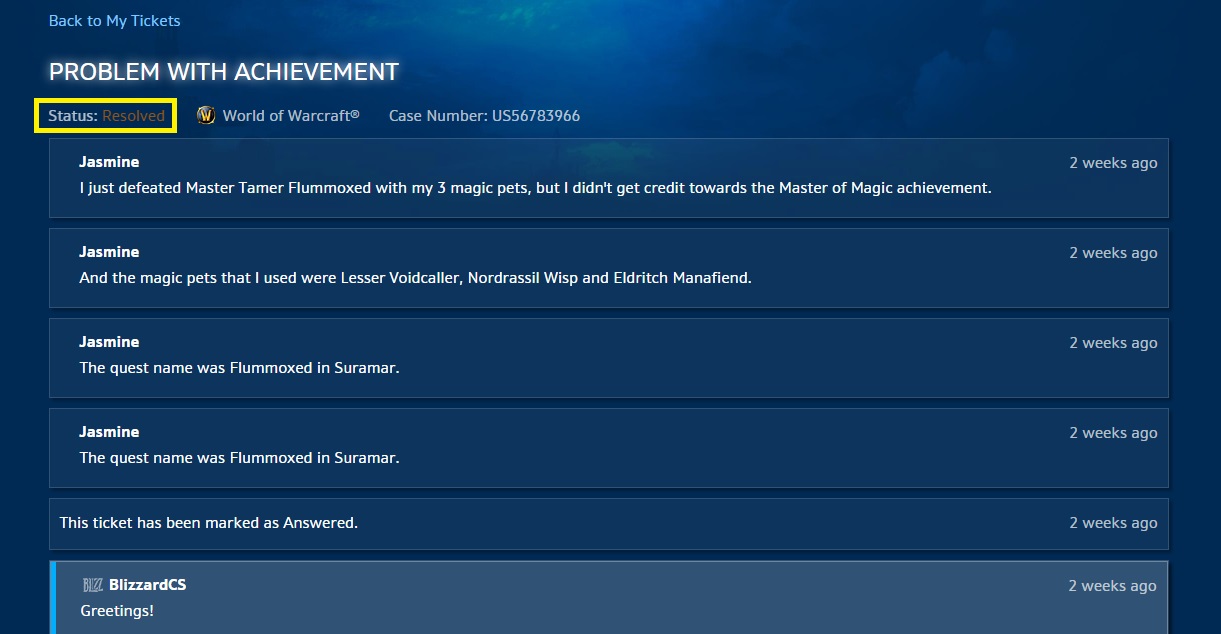 And there goes a response from a Game Master. He was basically saying that he cannot solve any problems in regards to achievement issues. Really? Then, what's the Achievement section for? Is Blizzard Customer Support trying to manipulate paying customers? Wow, I was shocked.

However, the core problem lies in the buggy system that the Game Masters rely on, so I decided to explain again as the system was bugged that it was the main reason why I reached out for their support. 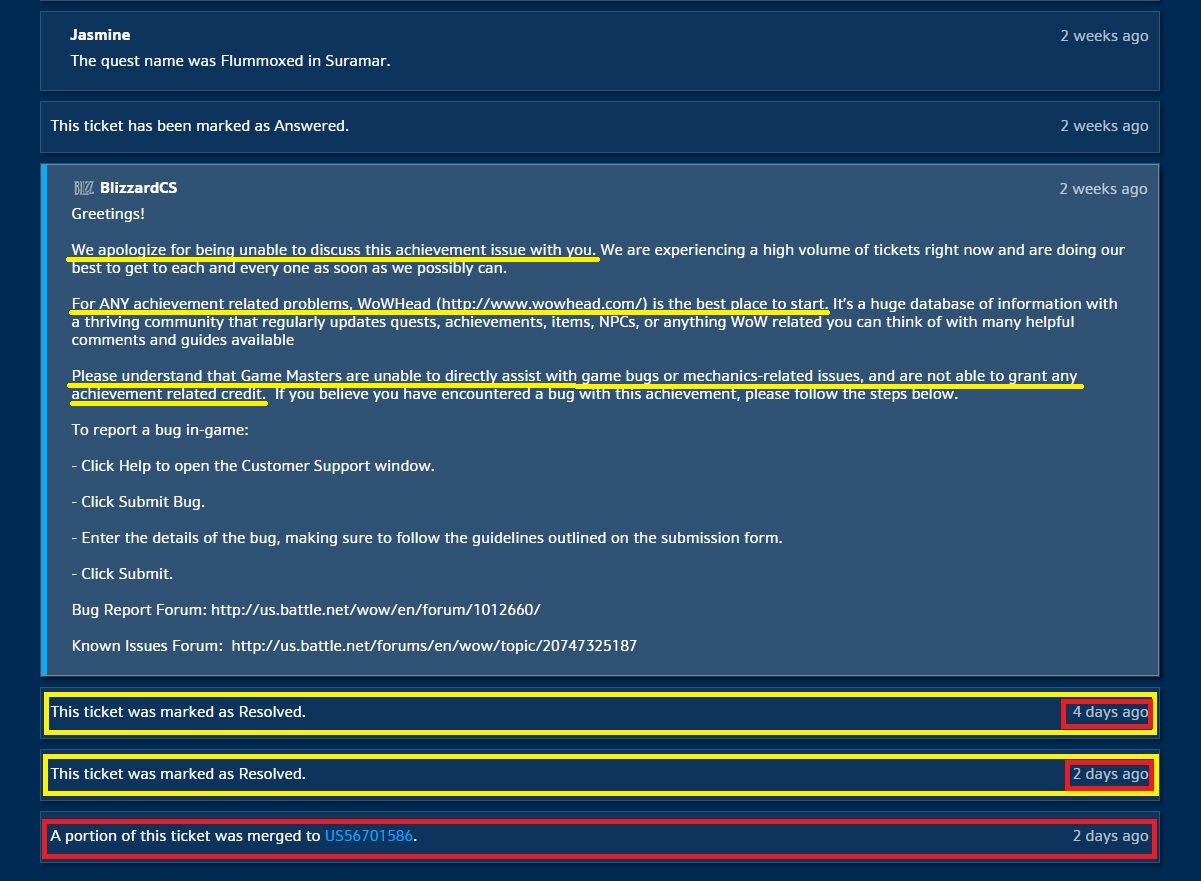 So a Game Master merged both of my tickets into one. Okay, it's about the same bugged system I suppose, so I didn't mind if they were merged.

Here are my replies to them before merging.
(Wild Conservationist - top & Flummoxed - bottom) 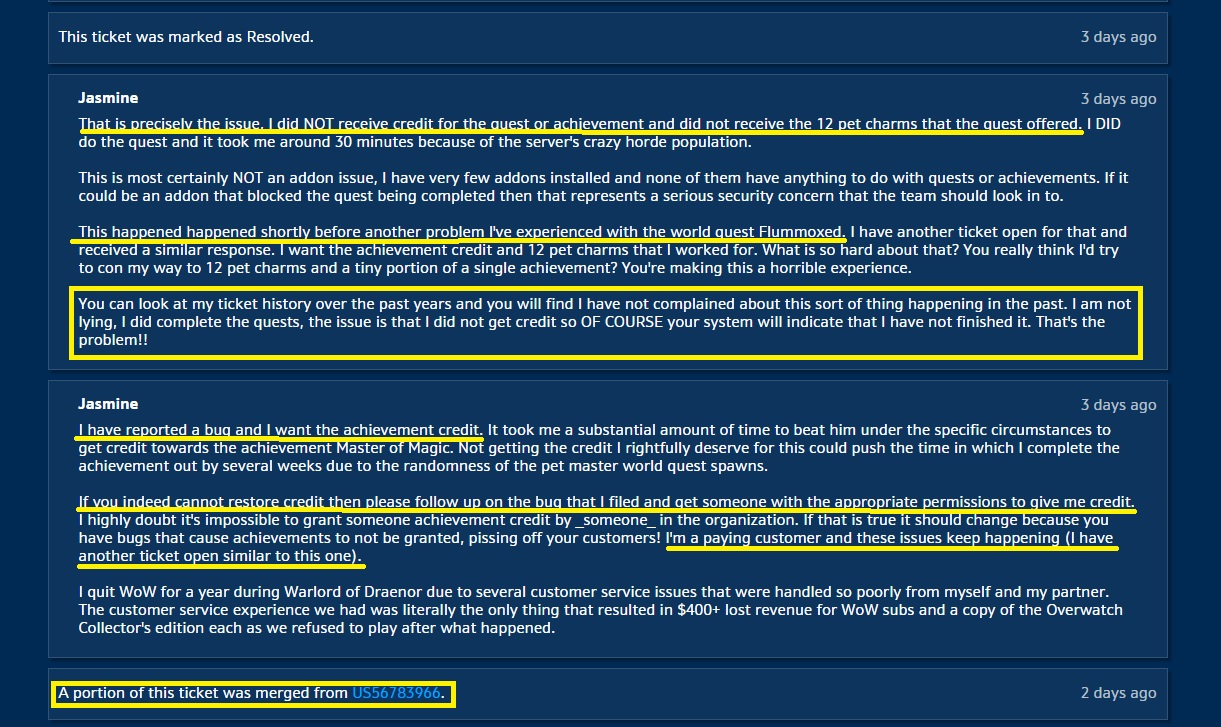 You can feel my frustration from the responses as I wasn't sure whether they just didn't understand the situation or they simply didn't want to believe me. So I even reached the stage to let them go and take a look at my past ticket history to show them that I wasn't lying or trying to take advantage. By the way, it felt very wrong to be accused as a liar by customer support as I didn't feel very valued or respected at all. So I even asked them to take the case up to the upper level who can actually investigate and resolve the issue.

Yet, another Game Master appears and doesn't mention anything about what the previous Game Master said. So after all, he lied and Game Masters can discuss Achievement related issues. However, this Game Master puts so much weight on add-ons, which were completely irrelevant to my case. If add-ons had anything to do with not receiving credit for a quest in a client server game that's been around over a decade, there are probably far worse problems then not receiving credit. And he still doesn't admit the fact that it's natural for their system not to have my record as it was bugged, which I created tickets for. 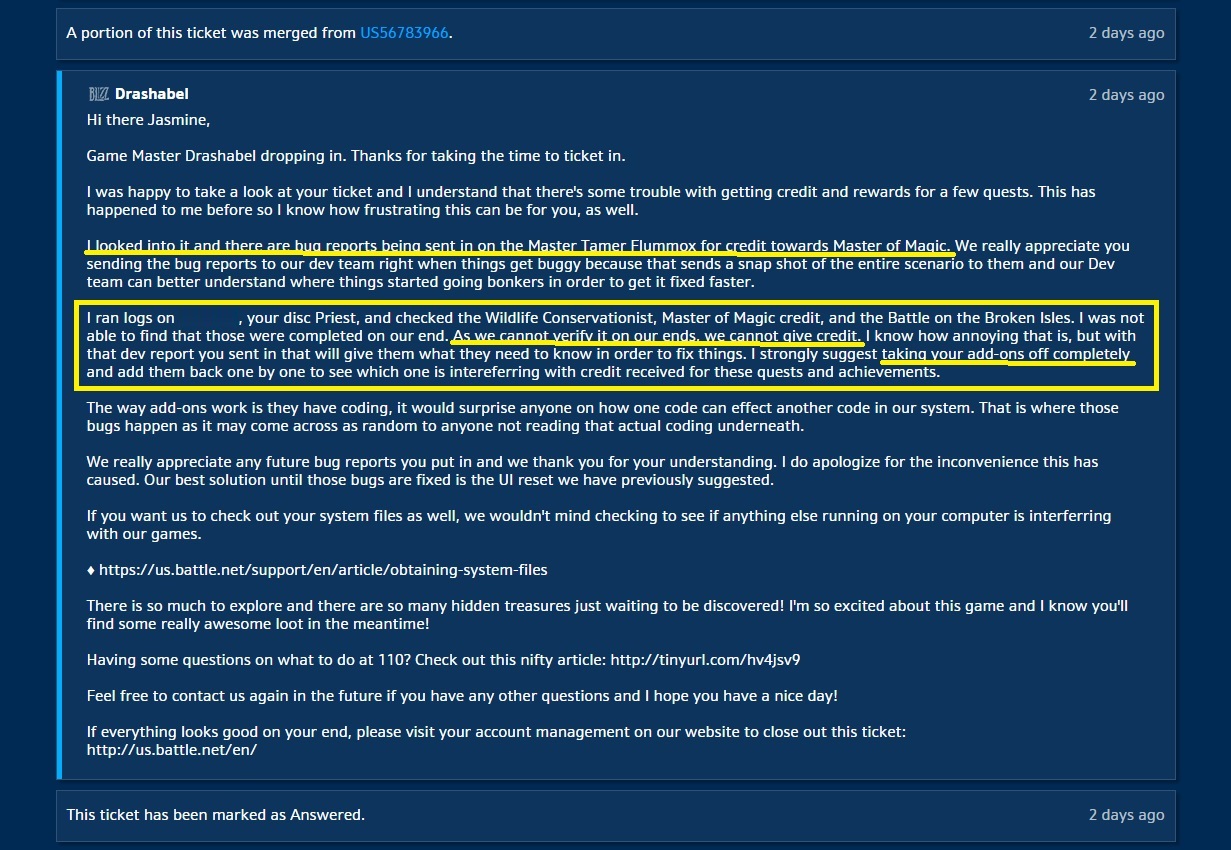 I could not believe the fact that none of the Customer Support was listening and rather mistreating the customer without any logical thinking. I even asked them to take the issue to their manager, but none of them were willing to do so. They just seem to be treating me as if there was nothing wrong in their system. I'm very certain that WoW still has lots of bugs. Regardless, as the Game Master was a different one to the ones that I was talking to, so I decided to explain to her all over again but in a more straightforward way. You know, I was getting sick of being mistreated as if I was lying. 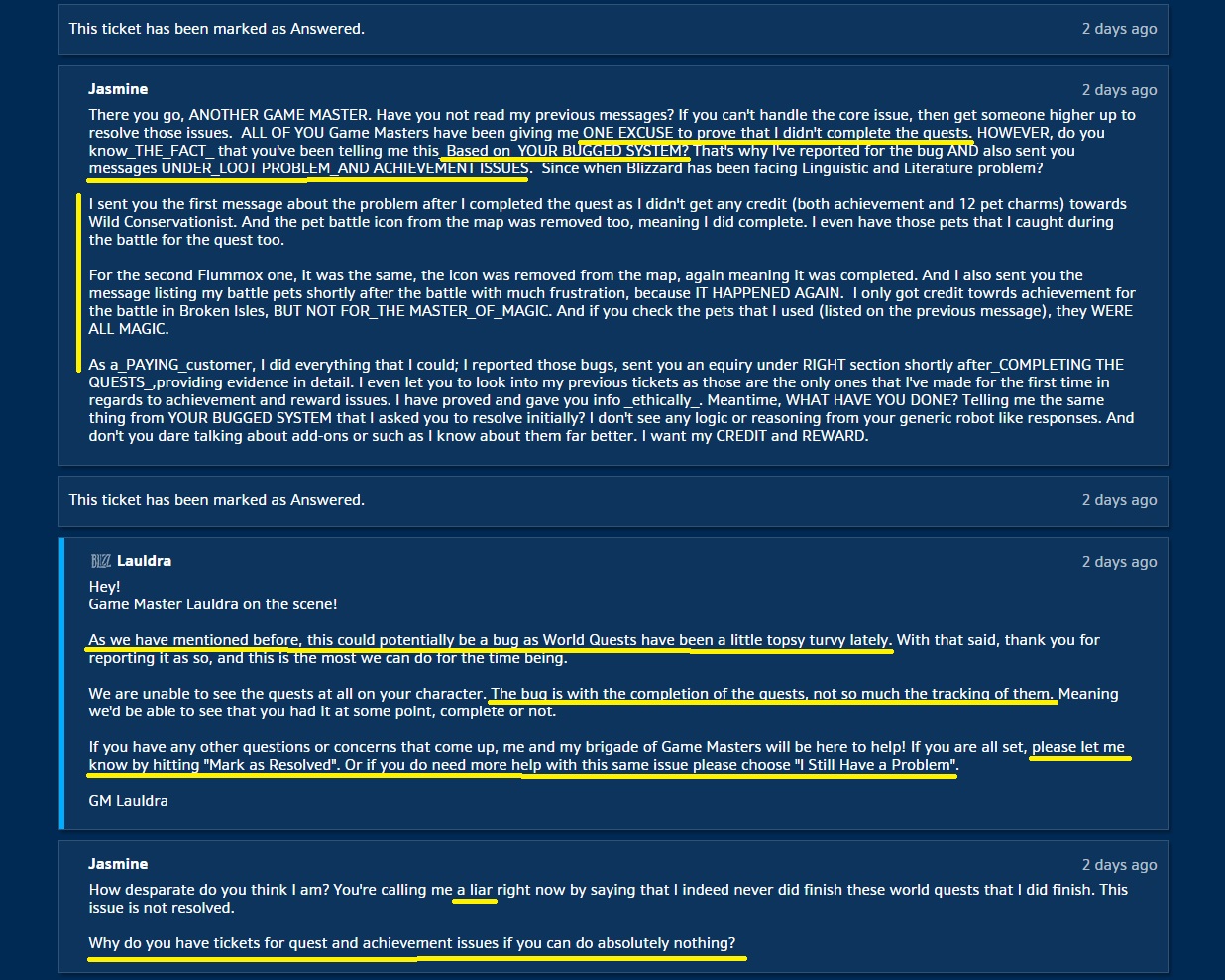 As she mentioned that I can click either Resolved button or I still Have a Problem button, so of course, I clicked the latter. And I asked about her ethics as a customer support and the management as they have been accusing me of a liar comparing me to the man-made game full of bugs. If I haven't completed any of the quests, then I wouldn't have been able to find the bugs. It seems to me that they worship this man-made system, which had so many reports that ticket response waiting time was approx. at least 5 to 6 days at the beginning. So where's logic and support?

Once again this was very unacceptable in Customer Support, and came off as very rude. As she mentioned in the ticket that she had to justify her actions to her bosses, so I decided to create a ticket for her manager. Of course, she lied, she just didn't believe me or she just didn't want to do any work so she was just rambling. And that explains why she closed the ticket and changed the status to Resolved without my consent. Anyways, you can never trust that kind of customer support. All of these Game Masters would've been fired if they worked for Amazon! LOL. By the way, what's with the stringiness with these virtual items, this is for credit for 2 parts of achievements (not even full achievements) which is worth literally nothing in terms of in-game or real world currency and 12 pet charms which are worth next to nothing. Oh my, Amazon customer service team would laugh at this. Yes, this is the true face of gold digging Blizzard. I'm very certain that this isn't the reason why so many game developers worked on WoW very passionately. Customer Support indeed doesn't meet the standard at all.

Unsurprisingly, a different Game Master replied, claiming that he asked his manager. They've been switching their words very much so that there was no credibility in the message. And he goes on with the same lines like the others did. Of course, my ticket didn't even reach a manager! Even if he really asked, then he would have cut all the ethical parts and explained to him in his way that I never completed the quest. And he forcibly changed the ticket status to Resolved without my consent. He also added some words that indicating never send us any tickets regarding this, which is the most shocking customer support experience that I've had in my life. 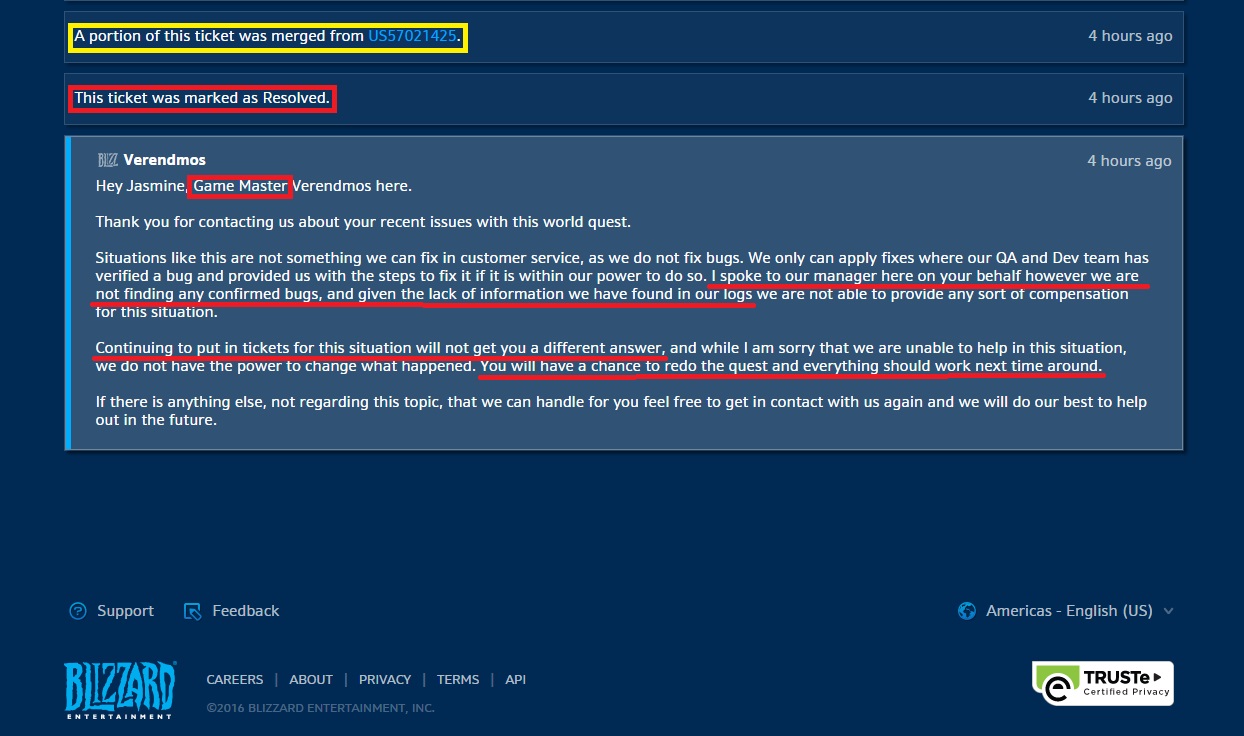 The best part about capitalism is that you get what you pay for. It's linear. And customer support is after all an outcome of that.

What I still don't understand is they somehow think they're defending the integrity of the game by not giving this credit and items which is completely worthless in a monetary sense. It's even worth next to nothing in terms of character progression, it's a silly little side game to keep people distracted and paying their bills. This integrity is somehow more important than taking the customer's side and giving what they deserve but did not receive due to a bug in their game.